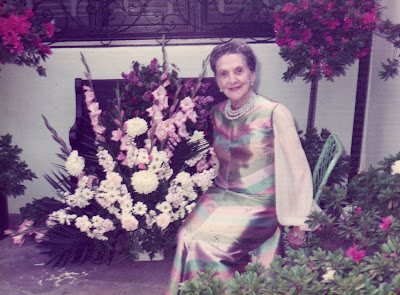 Beulah the night she won the Emmy. 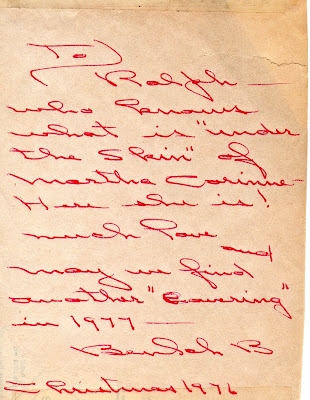 It came with the picture
Beulah told me of her two great professional disappointments. The first was when she was cast as Aunt Polly in David Selznick’s production of TOM SAWYER, and then was replaced by May Robson. But the bigger disappointment was when in 1939 she was contacted by 20th Century Fox Studios and asked to do a screen test. By this time in her career, Beulah did not do screen tests. She had been in Hollywood since 1931 and had had two Academy Award nominations. But this was a request from John Ford. He would be directing the test, and Beulah was assured she was the only person being tested. The role was Ma Joad in THE GRAPES OF WRATH. Beulah agreed to do the test. The script for the test was sent to her, and after she read it, she called the studio to request a delay of a week before testing. They agreed. Beulah had a plan. She dug into her personal wardrobe to put together a suitable costume. She told me she went into her yard and dug her hands into the ground to get dirt under her finger nails. She called a friend, who agreed to drive her on her little expedition. They traveled to northern California, where Beulah ’visited’ the Okie camps, camps that were set up to accommodate the vast number of people from Oklahoma arriving in California, the source for the material in John Steinbeck’s acclaimed novel. I asked Beulah whether she was ever recognized; after all by this time she was a screen celebrity. She said only once, and she made a hasty retreat. She visited several camps, and then returned to Los Angeles to prepare, as only Beulah prepared, for her screen test. The day of the test arrived, and Beulah reported to the studio, where Mr. Ford directed the several scenes. As she was leaving, the actor who had appeared with her in the test, in saying goodbye said, “Miss Bondi, I know my opinion doesn’t mean anything, I’m just a contract player here at the studio, but I just want you to know that I think you’re the best of all the actresses who have tested for this role.” Beulah said that she knew then she would not play Ma Joad, that it woud probably be portrayed by an actress under contract to the studio.
A loss of a role for the actress. A greater loss to film art of what would have been a legendary performance by a true screen immortal.
Posted by Ralph Senensky at 2:58 PM