This posting can also be viewed
(extended and revised) on the other RALPH'S TREK at www.senensky.com
STAR TREK was indeed a phenomenon. I directed six and a half episodes of the original series. I would guess (and I’m sure my guess is very close to being accurate) that I worked a total of ninety days on the series. I worked more days than that on just the pilot of DYNASTY. I directed twice as many episode of THE WALTONS and two and half times as many episodes of THE FBI; I directed more episodes of THE PARTRIDGE FAMILY and more episodes of THE COURTSHIP OF EDDIE’S FATHER than I did of STAR TREK. And yet today if you google-search my name on the internet, you will think I spent most of my career directing STAR TREK. As I said, STAR TREK was indeed a phenomenon.
How and when did this phenomenon involve me? It was early December, 1966 when one of my agents called to ask me if I would like to direct an episode of STAR TREK. I had not seen the show and I was not into science fiction, but I also was not one to turn down a challenge, so I said, “Yeah, go ahead and book me.” They did and the studio sent me a script, THE DEVIL IN THE DARK by Gene Coon, which was scheduled to be filmed in early January, 1967. I liked that script a lot. I then packed my bags and flew back to Iowa to spend the holidays with my family. A few days after my arrival, I received another script from the studio with a note telling me that they had switched scripts and I would be directing one called THIS SIDE OF PARADISE. I have to say I was disappointed. THE DEVIL IN THE DARK was a strange, eerie script, where THIS SIDE OF PARADISE seemed almost like a modern love story. But the die was cast, so I went to work on the new script.
After the holidays I returned to the west coast and reported to the Desilu studio to prep. Desilu was the old RKO Radio lot at Melrose and Vine, and I was happy to return there. That was where I had filmed BREAKING POINT, and that had been such a good experience. Our first order of business was casting. For Leila we got the exquisite JIll Ireland, and for Sandoval, the leader on planet Omicron Cetti III, we cast an old buddy from TWELVE O’CLOCK HIGH, Frank Overton. The big problem facing us were the buildings of the colony. There was neither the time nor the money to build, so we were faced with the problem of finding something standing that could fit the bill. Our search of the area produced only one possibility, the Disney ranch, and to use that we had to do some creative rationalizing. The ranch certainly did not look like it belonged in the STAR TREK century. But what if the settlers on this planet went to the past for their inspiration -- back to early Americana. Good idea? It had to be; there was no other choice.
We were scheduled for three days at the Disney ranch. The first two days went swimmingly. We completed over eight pages each day, were right on schedule, and it all seemed as if I was filming a rustic love story, the only difference being that the guys were dressed in funny suits and one of them had funny ears. Then came day three. We reported to the ranch as usual in the dark, so that we would be ready to film with the first light of day. But before the first light got to us, the news did that Jill Ireland would NOT be reporting to the location; it was feared that she had measles. We then went to work, completing all the scenes at the ranch that did not include her; after which we packed up, moved back to the studio and finished the day filming on the Enterprise. The next day we learned Jill did not have measles and would be returning to finish the show. However we hit a new snag. The Disney ranch was no longer available; it had been booked by another film company. The fortunate thing for us was that all of the scenes that involved buildings at the ranch had been completed, so arrangements were made for us to complete our location filming in Bronson Canyon, an area in the hills close to the studio and an area with which I was very familiar.
I was amazed then, and now inching toward a half a century later, I am still in awe of those studio magicians who in answer to a request for a 'garden' in the middle of a pristine green landscape could fulfill my request.
This was my first film with cameraman Jerry Finnerman, and it was the beginning of a friendship that has lasted over forty years. Jerry later told me that it was the following scene that made him sit up, take notice and decide that I was a director he really wanted to work with. That feeling was reciprocated.
There was another first for me on this production (and I think probably a last). I had a scene blocked, lit and ready to shoot and I was not happy with what I was seeing. To forestall any possible other recollections of what occurred, let me produce some archival evidence. First the script for the scene. Read scene 53. You will note it is set in an Exterior Open Field. (To enlarge the illustration just double click twice on the image; the page of script should then fill your computer screen. To return to normal size, click on the arrow in the upper left corner that returns you to the last page.) 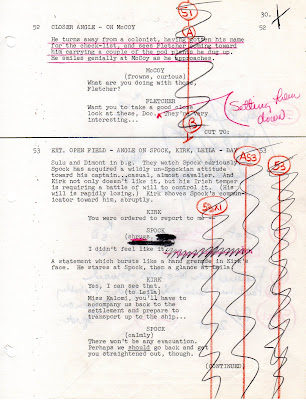 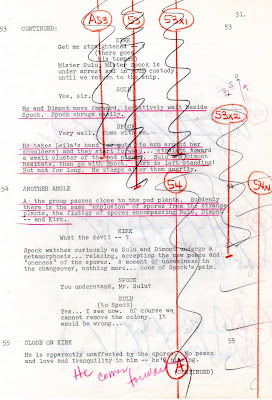 Now read my pre-planned directions for filming the scene. You will see that shot 53 was a five shot. 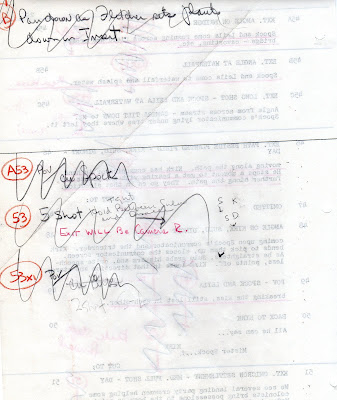 Fifty yards away I had spotted a very inviting limb. I asked Jerry if we could break the set-up and move the scene to another location. He readily agreed. So we moved everything the fifty yards and filmed the scene as you may remember it and will now see it.
Jerry Finnerman, director of photography, was a master at lighting. He had learned his craft from a giant in the film industry, Harry Stradling. Jerry was the assistant cameraman on Stradling’s crew, and then he became Stradling’s operator. His close-up of Jill Ireland in her first scene in this film I think is a master work. Jerry placed a small baby spot directly behind Jill’s head. Her movements had to be very restricted or the lamp would show.
In the following two clips of Kirk alone on the Enterprise, note not only the overall beauty of his photography, but also the light changes in the close-ups of Captain Kirk.
This was a very good outing for Leonard Nimoy. Mr. Spock had said, "Emotions are alien to me. I am a scientist." But here he was in love, playful and in a climactic confrontation with Kirk he showed great anger. I personally liked the comic touch of Kirk’s last line, on his back with Spock towering over him, “Had enough?”
The crew is back on board, the love affair is over, and all that Spock has to do is participate in my favorite final scene of the STAR TREK episodes I directed.
And a very nice note from Mr. Spock. 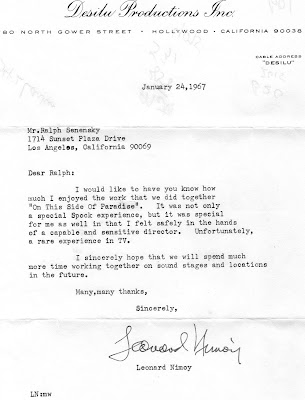 I was no longer disappointed that THIS SIDE OF PARADISE had been substituted for THE DEVIL IN THE DARK. What I didn’t know at that time was than an even stranger and better script than DEVIL (and also written by Gene Coon) would be my next STAR TREK assignment.
You can hear my telephone interview on this episode by going to the Star Trek History website at:
http://www.startrekhistory.com/interviews.html
Posted by Ralph Senensky at 4:40 PM